How many tons of meat are produced in Germany? How much of it is exported? We answer these and other questions about animal husbandry and meat production in Germany with a synopsis of current data.

Meat consumption has remained relatively constant at just over 7 million tons over the past decade, but in 2021 it is down for the third year in a row. Meat production, on the other hand, has initially increased almost every year since the BSE crisis in 2001 - measured in terms of slaughter volume - and was just under 9 million metric tons in 2016. Since then, there has been a decline to around 8.3 million tons in 2021.

The significant decline in pig numbers and pork production is the main driver for this decrease. The main reasons for this development are changing consumption habits as well as the occurrence of African swine fever in 2020 and the associated loss of third-country exports, especially to China. In addition, there was periodic "pig congestion" in the barns due to the lack of slaughter capacity during the Covid pandemic.

Finally, the societal discussion about higher standards for animal welfare and the environment must also be mentioned, as well as the lack of perspective on the part of the market and politics. All in all, these developments have led to great uncertainty among producers, resulted in the stop of pig farming and a lack of investment in sustainable housing and husbandry concepts.

Pork is still the most important type of meat in Germany. From 1999 to 2021, however, per capita consumption fell from just under 55 to only 43 kilograms. In contrast, slaughter volume has risen steadily over the past 20 years from around 4.1 million to around 5.6 million tons in 2016. Since then, there has been a decline in production to just 4.97 million tons in 2021. Despite the outbreak of African swine fever in September 2020, however, Germany remains a net exporter because the so-called regional concept applies in the EU and trade may continue from regions which are unaffected by ASF.

With the exception of poultry, overall livestock numbers are declining. It is not possible to state the exact number of animals as of the reporting date, as the animal populations are not surveyed for all animal species in every year and on the same reporting date.

Unsurprisingly, poultry has the highest share in terms of numbers. In 2020, a total of 150 million animals were kept in Germany; of these, 107 million were fattening poultry including turkeys, ducks and geese. In 2020, 42 million laying hens were counted.

Pig farming is also of high importance in Germany in terms of numbers. In the May 2022 census, the number of pigs was 22.3 million animals, continuing a clear downward trend. Of these pigs, almost two-thirds are fattening and young pigs.

The cattle herd has also continued to decline to just under 11 million head in May 2022, with 3.8 million dairy cows also at the lowest level in the last 20 years.

Sheep farming plays only a minor role, with fewer than 1.8 million animals kept.

More than half of all cattle farms in Germany have fewer than 50 animals. In contrast, 54 percent of all cattle in Germany are kept in herds of more than 200 animals. This corresponds to around 11 percent of farms. With regard to the farm structure in cattle farming, it must be taken into account that all cattle categories (dairy cows, suckler-cows, beef finishing cattle) are included here.

Farm structures for pigs are similar to those for cattle: Almost half of all pigs kept in Germany are in herds with more than 2,000 animals. As with cattle, the farm structure of pig farming is not the same in all production directions. For example, farms in pig fattening are comparatively larger than those in sow farming.

The trend toward large flocks is even more pronounced in poultry: on the one hand, most farms in Germany keep no more than 100 young broilers. On the other hand, 80 percent of young broilers are kept in flocks with more than 50,000 birds.

The map is based on the 2020 agricultural structure survey.

Measured in terms of livestock units (LU) per hectare of utilized agricultural area (UAA), the center of the finishing industry (pig and poultry farming) is located in northwestern Germany and in the foothills of the Alps. The regional centers for cattle farming are mainly in Lower Saxony, North Rhine-Westphalia, Schleswig-Holstein and Bavaria. Dairy cows and suckler cows are mainly located in counties with a high proportion of grassland.

The "Livestock Fact Sheets" (Steckbriefe zur Tierhaltung), which have been published for several years and are updated annually, are intended to provide a brief overview of meat production, consumption and foreign trade. They also provide information on the development of livestock, farm structures and the spatial distribution of production in Germany.

The fact sheets are published in German only.

Episode 3: To each animal its own pleasure?

German livestock farming is under pressure: international competition here, demands for higher animal welfare and environmental standards there. Every form of animal husbandry is associated with environmental impacts. Are there options for making animal welfare, environmental and climate protection an integral part of agriculture? 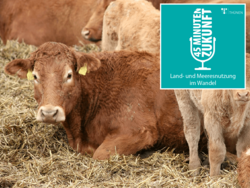 More light, more air, more freedom of movement: More animal welfare is to be ensured in German barns. The Borchert Commission has proposed the introduction of an animal welfare surcharge. The infographic explains how it works. 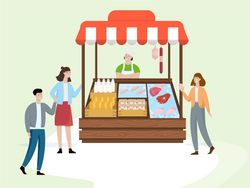