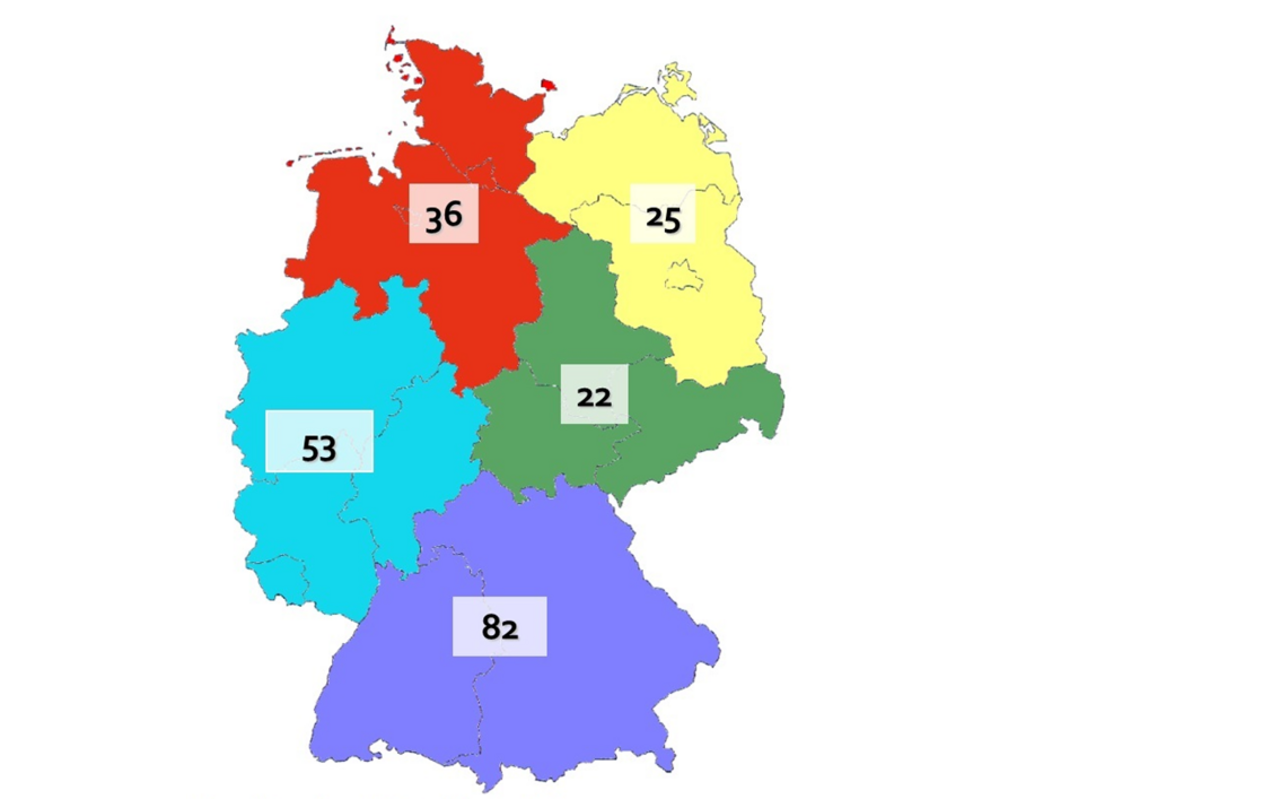 Organic farms are marked by extraordinary diversity. This diversity is caused, among other things, by locational factors; the outset situation at the time of conversion; the farm's own course of development in the process from conversion to the establishment of organic farming; the production guidelines from organic farmers organizations; the socio-economic framework conditions, and the abilities, expectations and preferences of the farm manager.

Even today, a system oriented analysis of organic farming is lacking which integrates both the technical aspects as well as the socio-economic aspects and considers the holistic needs of organic farming. For this reason, in 2002 and 2003, an extensive interdisciplinary analysis of the state of the art of organic farming in Germany was undertaken, and at the same time a long term research-organic farming-network established.
The study is based on a nation wide survey of 218 randomly chosen organic farms throughout Germany. In the framework of an interdisciplinary survey with face-to-face interviews, the different crop production and husbandry practices, the marketing channels and forms of cooperation as well as important economic and sociological data were detailed surveyed and analysed.

The official data from organic farms (from agricultural reports and agricultural census) provide certain basic information on production and structure as well as about costs, returns, and the income situation. But detailed data on individual production practices and husbandry systems, on marketing methods, on farm internal interdependencies, forms of cooperation and the perspectives of the farmers and their families are not included in this data. For this reason, many deeper analyses of importance for policy advice could either not be conducted in a satisfactory manner or not be conducted at all with the available data.
The aim of our project is to develop a concept for a result-oriented approach to improve animal welfare. One of the challenges is the selection of suitable indicators. Exemplarily for dairy, we will suggest a set of indicators, approved by scientists and practitioners, which address major welfare issues in dairy farming.

A nationwide survey of 218 randomly selected organic farms with varying production practices and husbandry systems, marketing paths and forms of cooperation as well as important economic and socio economic data were surveyed and analyzed in a detailed interdisciplinary framework.

With the help of monitoring agencies, in a first step, a 10 percent random sample of all farms practicing in accordance with the EU Organic Farming Regulations (VO EWG 2092/91) was drawn (1279 farms). In a second step farms were sorted out of the survey which did not meet the following criteria: conversion point before Dec. 12, 1998 (so that certified organic products could be sold in 2001); agriculturally used areas of  less than one hectare, and farms with a production emphasis on special cultures (like vineyards or horticulture). In order to adequately compensate for regional specifics of agricultural production in the random sampling, five regions were defined which are comparable with regard to their spatial and agricultural structure factors. The study farms were identified after the process of root proportional distribution, or rather layering according to these regions.

In two several hour interviews, important basic data for the disciplines, arable farming, animal husbandry, farm economics and socio-economics were surveyed. A total of about 300 questions with up to 15,000 variables were surveyed and made statistically accessible.

The 218 randomly selected farms manage an average of 103 ha UAA in 2002, of which about 54 ha are used as arable land. The smallest surveyed farm has 1.9 ha UAA, the largest 1480 ha UAA. Thirty two percent of the surveyed farmers run their farms part-time on a comparably small scale, so that they comprise only seven percent of the surveyed land area. With regard to farm type (self-appraisal by the farmers), the following distribution emerges: 40% mixed farms, 39% grazing livestock farms, 19% arable farms (about half without animal husbandry) and 2% intensive livestock (pig/poultry) farms. The largest portion of the surveyed farms has both arable land and permanent grassland (67%). One quarter of the farms studied can be called “permanent grassland farms”, about  ten percent of the study group as “purely arable farms”. A total of 89% of the studied farms keep livestock. The livestock density is on average 0.80 LU per ha UAA and 1.34 LU per ha main forage area. Dairy cows are kept by 31% of the farms, 45% keep suckler cows, 32% fattening pigs, 31% laying hens and 14% sheep. The average herd sizes are 32 dairy cows, 58 suckler cows, 41 fattening pigs, 239 laying hens and 231 sheep.

In the surveyed farms, plant production takes many forms. This reflects the various structures of the farms  from purely cash crop farms without animals at one end and mixed farms with 2 LU/ha at the other end. Arable crops are produced by about three quarters of the farms. One quarter of the farms manage exclusively permanent pasture.

The average yields in the three year period (2000, 2001, and 2002) were, depending on type of cereal, between 2.1 t/ha (rye on relatively poor soils) and 3.8 t/ha (winter wheat) (see Figure 2). A high variation in yields can be observed. In 2002, a very wet year, an average of seven percent (oats) to 33 percent (winter triticale) less grain could be harvested than usual. Due to different levels of set aside land on the farms, the amount of crop rotation yields is important to evaluate the yield situation. Crop rotation yields make a better comparison of differently structured farms with different crop rotations possible. A crop rotation yield of more than 2.0 t/ha for all threshed crops was achieved by 47 percent of the farms in the very wet year 2002. The farmers assume between 20 and 30 percent higher crop rotation yields under normal weather conditions.

Due to nitrogen fixation, legumes are of special significance for the maintenance and improvement of soil fertility in organic farming. The share of legumes is therefore on average 41% of arable land (dried pulses, arable feed cropping, etc.). Animal feed is the most important use of these crops. A total of 98% of the farms practice fodder production with legumes. Only 16 percent grow silage maize, five percent pure field grass and four percent whole plant silage. Silage, at 79%, is the most important form of conservation. Hay is still made by 34% of the farms.

Catch crops (intercropping and under sown crops) are practiced by 60% of the farms, in Region 3 (Bavaria and Baden Württemberg) even by 75% of the farms. In farms with catch crop planting, catch crops make up about one third of the arable area. The most important problems identified by the farmers in organic plant production are weed control, nutrient supply, and plant health. Nevertheless these problems are seen by the farmers as manageable. The problems in production technology are assessed less critically than the marketing problems.

Against the background of calls to feed organic livestock 100% organic feed, farmers have chosen to concentrate on cultivating protein plants. Here, as in the case of oil seeds, a great deal of research is needed. With regard to seed origin, it has been found that in cereal production the use of own seeds is of great significance and the exclusive use of seeds from organic farming presents no problem. Organic breeding and the development of suitable varieties for organic farming are at the top of  the urgent list of the farmers, particularly with regard to the problematic of genetically engineered plants. Changes in crop production, either in the past or the future, show a permanent dynamic in the farms. The motivations behind these changes, such as a reaction to reduced or increased sales possibilities, or farm internal needs, show that the farmers are forced to be very flexible in planning their cropping.

The average age of all surveyed dairy cows was 5.8 years, the first calving age 31 months, the interim calving period 387 days, and the replacement rate was 24 %.

In 52 percent of the dairy farms no feed was purchased. The average concentrate level was 9 dt/cow and year (0 – 22 kg) and some farms were able to obtain a mean milk yield of 5000 kg without concentrates.

The greatest problem in dairy cattle keeping at the moment is, according to all surveyed, animal health, in particular udder health, and marketing. Twelve percent of the farmers also addressed problems with the implementation of the husbandry regulations (among others, outdoor access, prohibition of tethered stables after 2010).