Farm incomes are subject to strong fluctuations: The prices a farm can achieve for a liter of milk or a kilo of meat change from year to year - as do the prices for seed, fertilizer, feed and energy. We analyse income developments over time.

Based on the German Farm Accountancy Data Network (German FADN), we can assess the economic situation and development of agricultural holdings. We also use the data from the German FADN for impact assessments - for example, how a new design of Common Agricultural Policy (CAP) direct payments will affect farms.

In the German FADN, the farm accounts of representatively selected farms are collected and analysed on a voluntary basis. Around 9,000 farms are currently participating. The original aim of the German FADN was to record the income and expenses of agricultural holdings and thus to obtain information on their economic situation. Since the 1990s, however, the German FADN has been increasingly used for impact assessments of agricultural policy measures, in particular because it is the only representative database that includes not only characteristics of farm structure and production technology but also yields, expenses and revenues of agricultural holdings.

The data from the German FADN are also a central component of the farm programming model FARMIS, which we use to map agricultural activities in detail at the farm level and thus also to carry out ex ante assessments. In addition, our results can be projected to the regional and sectoral level via weighting factors.

The Thünen Institute has reached an agreement with the BMEL that also allows external scientists access to the German FADN. In doing so, the confidentiality of the data is ensured.

Agricultural holdings can be run in various legal forms. In Germany, around 98 percent of farms are organized as family farms or partnerships, while around two percent of farms are cooperatives and , limited companies or stock corporations, i.e. so-called legal persons.

In these legal persons, all labor forces are usually paid. By contrast, in family farms the employed labor forces are paid, while the income of the family labor force arises from the residual of revenues and expenses, i. e. the profit.

The ratio ”profit plus personnel expenses per worker“ takes account of such differences and thus reflects the average remuneration of all labor forces on the holding. However, this indicator is of only limited relevance to the income situation of family farms, as paid labor forces are generally earn less than the holders/managers.

In this average consideration across all farms, no distinction is made between paid and unpaid labor forces. The major differences in agriculture, e. g. due to specific production directions, farm sizes and regional location factors, are also not considered.

The incomes between the farm types differ significantly in some cases. For example, fieldcrop farms have a significantly higher average income per worker than milk farms in the economic years studied.

Particularly striking are the strong fluctuations in income over the most recent five economic years among granivore farms, with an extremely good result in the 2019/20 economic year before the outbreak of swine fever in Germany. Current price developments on the pig market suggest another significant drop in income for this group of farms in the 2020/21 economic year.

Overall and in all farm types, a considerable variation in income can be observed. The greatest income variation is found on granivore and fieldcrop farms, while horticultural, other permanent crop and wine farms show a comparatively low variation. Averaged over the three economic years 2017/18 to 2019/20, an income of around 36,000 euros per worker was achieved across all farms.

Direct payments are a central point of discussion in the debate on the direction of the Common Agricultural Policy (CAP). The analyses of the farm accounts from the German FADN show that direct payments are an essential component of farm income. In the 2019/20 economic year, they accounted for about half, averaged over all farms, and by 60 percent the year before. The fact that the share of direct payments fluctuates significantly from year to year is mainly due to the annual ups and downs in income, while direct payments (based on hectares) are relatively constant over time.

The share of direct payments in income per worker is highest for fieldcrop farms. For farms with the highest value added per hectare - horticulture, wine and other permanent crops - the share is the lowest.

What is the impact of investment support in agriculture?

If agricultural holdings are keen to persist they ought to invest in technology and buildings. The state supports them via grants and garantees. We investigate the effectiveness and efficiency of these aids. 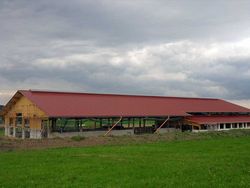 The Common Agricultural Policy (CAP) of the EU has a significant influence on farm incomes. But does the CAP reduce income gaps in the agricultural sector? What (unintended) distributional effects would further liberalisation of the European agricultural sector entail? 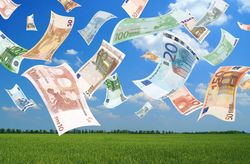