Forest damage due to drought and heat

WO Institute of Forest Ecosystems

German forests are still suffering from the hot and dry weather conditions of the years 2018, 2019 and 2020. Below, we provide answers to frequently asked questions about forests and climate.

Throughout Germany, we observed damage and the dying off in old stands of spruce, but in some areas also of beech. Pines and oaks seemed overall to be less affected. This is partly due to a higher tolerance of the two species to drought and heat (Sessile Oak is particularly noteworthy here) but also due to the climatically less severe conditions in the regions of their distribution. However, in some regions both tree species suffered from the infestation of pests (among others nun moth, pine-tree lappet moth, pine beauty moth, Diplodia shoot dieback on pine, and oak processionary moth, gipsy moth, winter moth on oak).

Considerable damage also occurred in plantations and areas of natural regeneration. Important information on the vitality of forests is provided by the time series of the Crown Condition Survey (Waldzustandserhebung), which has been carried out since 1985.

After 2018, the situation escalated further by the hot and dry year of 2019. At least 180,000 hectares of forest died and more than 100 million cubic metres of damage wood accumulated. Including the damage for the year 2020, the Federal Ministry of Food and Agriculture (BMEL) assumes that 171 million cubic metres of damage wood (harvest timber without bark) and an area of 277,000 hectares will have to be reforested.

This data is difficult to imagine due to its unpreceded magnitude. Comparisons may help: The damaged area of 277.000 hectares is larger than the total area of the German federal state of Saarland. A solid footbridge of 1 m width and 45 cm thickness, built from the 171 million cubic metres of damaged wood, would reach from the earth to the moon.

The term "forest dieback" is misleading. The current damage affects individual trees, groups of trees and, in the case of spruce, stands. However, the forest does not disappear, but other trees can use the resulting gaps for growing up, so that forest can develop again. In larger dead areas, plantings of new trees are used to reforest the area. However, dealing with the current damage requires a great deal of logistical and economic effort, which poses significant challenges for the forestry industry.

The current damage is also not primarily caused by air pollutants and acid rain as it was in the 1980s, but by climate change and intensifying extreme weather. The long-term solution, therefore, is to drastically reduce greenhouse gas emissions to limit warming.

The causes of damage are different for each tree species. In the case of spruce - the tree species with by far the highest proportion of damage - bark beetles (spruce bark beetle, copper engraver) are mainly responsible for the damage. These were able to spread further in weakened spruce stands due to the already significant damage in 2018. Vital spruce trees can defend themselves against initial infestations by resin that surrounds beetles at the point of entry, but not against mass infestations. Drought, however, causes spruce to produce less resin.

Beech trees have been damaged by the direct effects of heat (leaf damage, sunburn) and drought (crown wilt). Fungi and other pests such as the beech bark beetle can then cause the trees to die. Drought and a variety of different pests also interact in pines and oaks.

The cool and wet weather in the outgoing winter and spring/summer of 2021 replenished the soil water reserves of the upper forest soil layers. This has a positive effect on the water balance of the trees, especially during leaf and needle budding with high water requirements. Young and newly planted trees in particular benefit from the current high topsoil moisture.

However, the deeper soil layers are still too dry in many regions after three heat summers and excessively dry winter periods in recent years. It will take a longer period of time and more precipitation before they return to pre-2018 moisture levels. As a result, forests remain vulnerable to new drought conditions that can develop quickly.

The cool weather has also inhibited insect pests from developing. The swarming season of bark beetles was delayed several weeks in the spring of 2021. However, the bark beetle population is so high that damage is expected to continue. The delayed development has provided the opportunity to better reduce the spread and mass reproduction through consistent protective measures, such as the rapid removal of freshly infested trees. A relieving effect is that spruces form more resin with a greater water supply and can defend themselves better against bark beetles. However, further cool and damp growing seasons and effective protective measures are still needed to reduce the continuing high infestation pressure.

Climate change, with its more frequent heat and drought extremes, is expected to change the tree species composition. A risk analysis by the Thünen Institute indicates that about 2.85 million hectares of current forest stands (25% forest area share) are particularly sensitive to drought and subsequent pest infestation due to their tree species composition. These stands must continue to be actively converted and managed in such a way that they remain climate resilient in the future, i.e. are not acutely endangered by the advancing climate change. Forests that have already been converted should be managed so that they remain climate resilient. Funding requirements for conversion are estimated to range from 13 to 43 billion euros over the next 30 years. Annual conversion area would need to quadruple to 95,000 hectares to meet conversion targets by 2050.

Mixed forests with different tree species can reduce the risks of damage, so that a better-adapted tree species can take the place and function of a damaged tree species. Mixing in trees of our native tree species, such as beech or oak, that originate from the dry-warm distribution edge in southern (eastern) Europe can also increase forest adaptation.

Drought and heat favor the development of forest fires. The Federal Agency for Agriculture and Food (BLE) compiles annual data on forest fire frequency and forest fire area in Germany. According to this data, an average of around 800 forest fires have been recorded each year over the past ten years. Most forest fires occur in May and July. Compared to other German states, Brandenburg is particularly susceptible to forest fires because of its rapidly drying, sandy soils and easily combustible pine forests.

The German Weather Service (DWD) publishes the so-called forest fire hazard index on its website on a daily basis. This shows on a map how high the forest fire risk is in the individual regions of Germany from a meteorological point of view. As a further development of this index, the Thünen Institute of Forest Ecosystems is compiling a data collection of past forest fires with information on location, time of origin, fire cause, spread dynamics and other information (work package 1.1, History of forest fires) as part of the ErWiN joint project in order to analyze climatic conditions of origin for fires.

Several years ago, the Thünen Institute of Forest Ecosystems and the Humboldt University of Berlin developed a system for the early detection of forest fires. The core of the system is a hydrogen sensor. When organic material burns, the first thing that is produced is hydrogen. If the hydrogen concentration in the air exceeds a certain threshold, the sensor reports the possible fire to a control center. In this way, a smoldering fire can be detected before there is an open flame. Valuable time is saved. 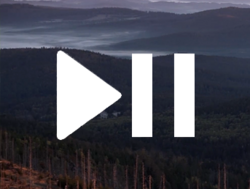