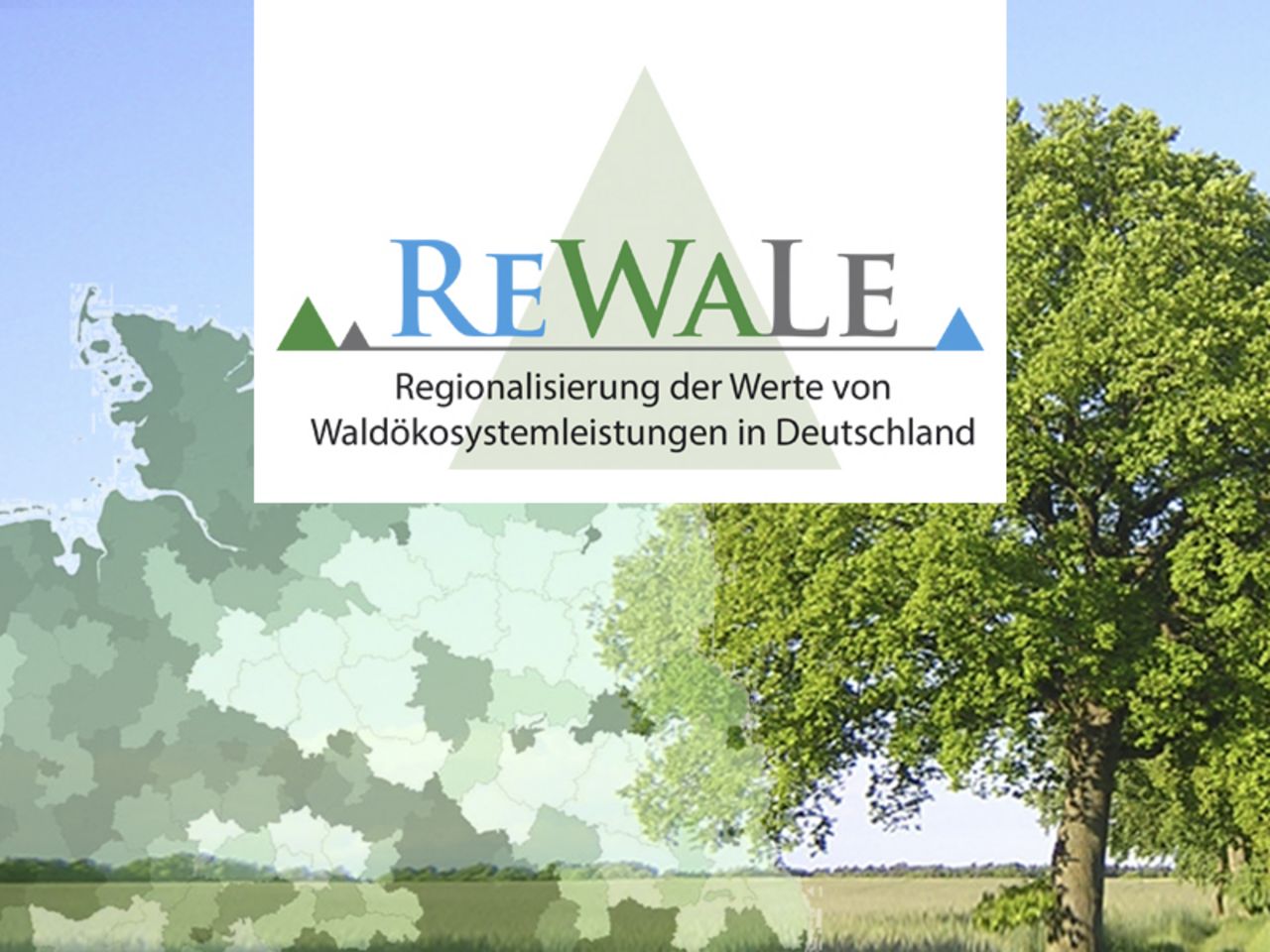 Demands of forest ecosystem services by the society are increasing in many fields, no matter if productive, protective, or recreational functions are concerned. As a result, regionally varying trade-offs are to be expected. This fact is acknowledged by the Forest Strategy 2020 of the Federal German Government. The Strategy asks for applying the economic approach of the TEEB study to the ecosystem services of German forests and their biological diversity, for quantifying these values and finally, for integrating them into decision processes.

The study aims at determining the economic benefits of fundamental forest ecosystem services (FES) in Germany from a demand perspective, at identifying their regional distribution, and at merging the respective benefit estimates into a consistent model which provides for scenario analyses of alternative forest utilisation options. Specifically, we consider the monetary benefits of raw wood production as a FES, of global climate protection (via carbon sequestration), of everyday recreation for the population, and of services for nature protection and landscape amenity, which accrue in the course of regular forest management as well as due to the establishment of separate protection areas.

For this purpose, we combine available valuation data, information from official regional statistics, and an additional primary study, to identify regional specific drivers of the FES’ monetary benefits and to derive generic valuation functions for each of the services. Using a Geographical Information System, these valuation functions are then applied to the conditions in the Local Administrative Units (municipalities), resulting in Benefit Function Transfer estimates for each service and each municipality. Afterwards, results are aggregated to NUTS-3 level (counties) and mapped. Subsequently we simulate the consequences of modified regional conditions (e.g., modified forest management) for FES values and their relations, by appropriately changing the input data.

ReWaLe requires a multitude of economic and ecological data for the monetary valuation of forest ecosystem services as well as for the modelling and the scenario analyses. Parts of these data have to be gained for the project by means of population surveys. Predominantly, however, ReWaLe can rely on existing results of previous studies of the institute as well as on external results of market studies, forest inventories, forest health assessments, and ecological monitoring programmes. A geographic information system (GIS) developed as part of the project is used for the consolidation and analysis of the data. It also supports the valuation studies and the interpretation of results. A second database contains relevant results published in the scientific literature. It is accessible in the web.

The relationships between the socioeconomic and ecological framework conditions on the one hand and the monetary values of forest ecosystem services on the other hand are described by means of mathematical equations. These equations constitute the core of the model. In the scenario analyses the explanatory variables of the equations are modified for each county of Germany reflecting various options for political decisions. The resulting economic values of the various forest ecosystem services are mapped county by county.

For valuing raw wood production as a FES (chapter #2), we determine the ‘annual gross revenue potential’ in the municipalities (equivalent to the ‘production value of biological production’ in the German forest accounts, evaluated at gross proceeds). Quantities (volumes) are established by adopting the average increment of merchantable wood (differentiated by 9 tree species and 82 growing areas) from the current federal forest inventory (BWI2012), which can be interpreted as the sustainable harvesting potential. This volume is evaluated at tree group specific gross prices which originate from the test enterprise network of the Federal Forest Ministry. (We do not subtract harvesting costs from gross prices since the harvesting activity is also financed through the FES, to the benefit of the national economy). Adding up all German municipalities, the ‘annual gross revenue potential’ amounts to 7.1 bn €/a under the Status Quo; regional foci are in the Central Uplands which are shaped by high-yield tree species, and in the densely wooded north-east of Germany.

The global climate protection service (#chapter 3) is valued on the basis of annual carbon sequestration. Its volume is quantified by extrapolating above ground tree biomass increment from coarse wood increment, using appropriate expansion factors. The model allows for evaluating gross as well as net increment. The standard variant applies net increment, which remains after subtracting all losses from the respective carbon stocks; it is quantified by assessing stock changes. The model includes changes in the forest stocks, the harvested product (HWP) stocks and material as well as energetic substitution. Net changes of the forest stocks result from the difference of annual increment and annual harvests, which both are adopted from the raw wood module (and thus indirectly from BWI2012). Net changes of HWP stocks and substitution are assessed by dint of the Climate Calculator of the German Forestry Council (DFWR 2018), which distributes the harvested wood over different utilisations (with specific retention periods according to tree species and diameter) according to empirically determined averages.  Monetary valuation is possible at constant (=location and quantity independent) values, since the global atmosphere is only marginally influenced by German forests. The standard valuation variant uses market prices from the European Emission Trading System, interpreting these as best approximation of the true preferences of citizens and decision makers (damage cost estimates may be used for additional sensitivity analyses). In total, the annual benefits of the climate protection service of the German forests amount to 2.1 bn €/a (if net increment is used for quantification). Regional foci are similar as in the case of raw wood production (slight differences being caused by regional differences of tree species distribution, and the respective timber utilisation).

Recreation services (chapter #4) are valued using data from a Contingent Valuation Study by Elsasser & Weller (2013). Mean willingness-to-pay (WTP) in the municipalities is determined by the ratio of forest visitors and non-visitors and their respective WTP; the proportion of forest visitors is estimated by logit analysis. Under the Status Quo, average individual WTP amounts to about 30 €/p/a; aggregated to the total population this is between 2.0 and 2.4 bn €/a (adults only, or all inhabitants, respectively). In order to distribute total WTP over the forests, we estimate a generic distance function from the empirical frequency distribution of travel distances and deduce a “survival function” (i.e. an inverse cumulative frequency function). The survival function is used to distribute WTP from the municipalities over the surrounding forests, proportionally to their respective distance. The resulting regional distribution pattern differs markedly from that of raw wood production and climate protection: High values of the recreation services prevail in bigger cities and their environment (where demand is high due to high population density), and in regions with low forest density (where supply of forest recreation opportunities is scarce).

Nature and landscape protection services (chapter #5) are being valued by an own primary study; for “integrative“ services (i.e. in the course of regular forest management) we apply a Choice Experiment, and another Choice Experiment for “segregative” services (i.e. the establishment of additional protection areas), which is complemented by an additional modified Contingent Valuation study for control purposes. “Integrative” services include species diversity in forests, the broadleaves:conifer ratio and the proportion of Douglas fir in the forests as attributes; in the case of the “segregative” services, attributes are the size of a protection area, its distance to the respective place of residence, access to the area, and the question of whether tree species composition is being changed for more naturalness prior to the establishment of the protection area. These experiments yield estimates of individual WTP for changes of the particular services/attributes, and their dependence on local conditions (the Status Quo cannot be valued in this case due to methodological as well as logical reasons).

Individual WTP estimates are then linked to local conditions, in order to make an extrapolation to the respective regional population possible. With regard to the “integrative” services (chapter #5.4), we apply the avifaunistic biodiversity indicator of the German Sustainability Strategy for valuing species diversity in the forests; as this indicator is only available as one single average for Germany as a whole, we develop a method for emulating regional estimates for this indicator using ADEBAR data (Gedeon et al. 2015). Likewise, for valuing the broadleaves:conifer ratio a single pan-German valuation function would be insufficient, since the respective preferences depend on the local species mix, too; this problem is solved by an appropriate interpolation procedure. As to the preferences for Douglas fir proportions in the forests, we relinquish their integration into the model, as the respective valuation results are contradictory and hardly reliable. With regard to “segretative” services (potential protection areas), we initially find that the results of the two alternative valuation methods tested here match unexpectedly well (chapters #5.3.3 und #5.3.4); the estimates based at the Choice Experiment are then integrated into the model. As potential protection areas only embrace parts of the total forest area and their localisation is not known in advance, we develop a schematic procedure for systematising the distribution of protection areas over the forest area (chapter #5.5).

Some example scenarios (chapter #6) demonstrate the functionality of the model, and simultaneously inform about the consequences of different goals for forest treatment which are under discussion today. A moderate increase of the share of beech trees by 10 percent points at the expense of conifers (scenario SzBu+10, chapter #6.1) would increase landscape amenity benefits predominantly in the east and the south east of the republic, whereas about a quarter of all counties (mostly in the west and north west) would lose under such conditions; on balance however, gains would outweigh losses by 130 m €/a. At the other hand, losses of raw wood production would occur in almost every county, which add up to 300 m €/a. The climate protection service, too, would decrease by 21 m €/a; here two thirds of all counties would lose and one third would gain. Recreation values would not be affected. – A complete restoration of original species diversity (SzA100, chapter #6.2) would result in additional benefits of 900 m €/a, with particularly high gains in the north and in the west of the republic and along the axis between Dresden and Magdeburg. – The comparison of two scenarios localising an additional 285,000 ha of the forest area as protection areas (SzS55 und SzS51000) shows that a uniform distribution of many small 5-ha protection zones would yield lower utility gains than the selection of a correspondingly lower number of 1000-ha zones (based on the assumptions that the areas would still be accessible for recreation, and that no prior intervention for regulating tree species composition would take place). In the latter case, utility gains would sum up to 1.6 bn €/a, counterbalancing raw wood production losses of 176 m €/a.

The concluding discussion brings the limitations of the model into mind and offers several considerations for the interpretation of its results; furthermore we discuss which possible model extensions might be particularly worthwhile and promising. In addition, the appendix  gives an example of the model’s application potential for practical policy, by sketching an approach for rewarding the ecosystem services of forests which accounts for regional specific differences of FES values.