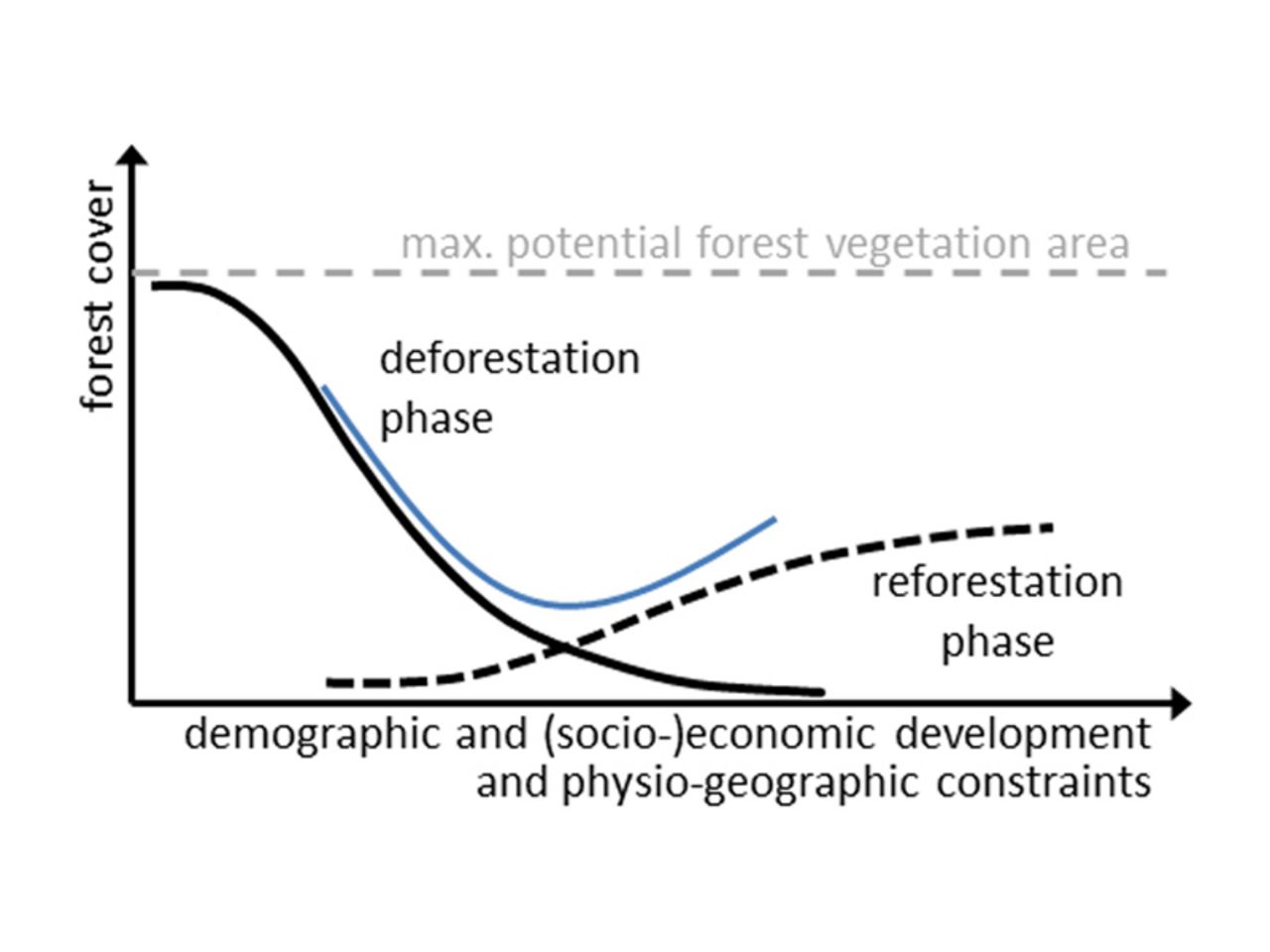 Is therearecurring patterninthedevelopmentof the forest areas of the world? Such a pattern could be useful for predictions and could help to reduce emissions from deforestation.

If theincentive and compensationsystem should be efficient and equitable, it presupposesaglobally consistentmethod for reference level design. Our method suggests the consideration of historical forest cover of each country and further national circumstances.

We base our analyses on the "Forest Transition Hypothesis". It states that forest area development follows a recurring pattern of forest cover decline and later re-expansion. Although such patterns have already been described for individual countries, it could not be demonstrated so far that the hypothesis is valid globally. A significant problem for such evidence is that such patterns are shifted and distorted over time between regions and countries.

To empirically test forest area patterns on a global scale, we have analysed the deforestation development of 112 developing and 30 industrialised countries, by applying multiple regression analyses. We have tested the influence of various factors on the deforestation development across the nations. We used data available from global statistics and cartographies on demographic, (socio-)economic and physio-geographical conditions of these countries.

Is therearecurring patterninthedevelopmentof forest areas of the world across nations and time?

Can a pattern of deforestation development be determined empirically?

We found a uniform relation of deforestation and population density across nations and time. This allowed us to determine a global deforestation curve.

The most significant impact on the forest cover of a country have:
• population density,
• grain yield per hectare,
• soil productive capacity and
• potential forest area.
A significant influence of the gross domestic product and further (socio-)economic factors, we could not determine.
Furthermore, we found no significant difference between the deforestation patterns of developing and industrialised countries. This shows that the curve may actually claim global validity.

The global deforestation curve is suitable to predict the forest cover of the countries in a future period. For prediction country-specific data for each nation are used, applied  for the significant influencing parameters. On this basis, we have developed a method to apply the deforestation curve as a forward-looking REDD+ reference level. The creditable deforestation reduction, which is accounted for a country under REDD+, would therefore be the actual forest cover development in a commitment period relative to the reference level. Forest area changes, which are caused by the country-specific circumstances, are subtracted from the individual countries’ responsibilities.