Munition on the seabed

Around 1.6 million tonnes of old munitions are lying and corroding in German marine areas of the North Sea and Baltic Sea since decades. The possible effects of released warfare agents on the environment, especially on fish fauna, are currently investigated.

In German marine areas of the North Sea and the Baltic Sea, a total of about 1.6 million tonnes of old munitions is lying on the seafloor. These include unexploded ordnance, unexploded sea mines and torpedoes as well as ammunition loads from sunken warships from the First and Second World Wars. By far the largest part, however, is ammunition that was 'dumped' in the sea after the Second World War (see corresponding YouTube sequence) in order to demilitarise Germany.

The Allies selected dumping areas along the German coasts to which the ammunition was taken. There, the dumped munitions have now been lying largely untouched on the seabed for more than 70 years.

The condition of the ammunition bodies on the seabed varies greatly; it ranges from little corroded and (still) completely sealed to rusted through and destroyed with the contents exposed. The condition of the ammunition bodies depends on their location. If they are covered by sediments, their condition can remain unchanged for a long time. If they are exposed to currents and waves, they corrode more quickly.

It has been scientifically proven that compounds typical of explosives, especially TNT (trinitrotoluene), leak out of the rusting munition dumps. How harmful these substances can be to the marine environment and possibly to humans is less well understood. TNT and its metabolites are toxic to fish in high concentrations. The chemicals are quickly diluted in the sea, but can be detected in traces in fish from munition dump sites. Since weathering processes in the sea are influenced by climatic conditions, climate change could lead to an accelerated release of pollutants from old munitions.

The speed at which pollutants are released from marine dumped munitions also depends on the respective local conditions, such as whether contaminated sites are exposed or covered by sediment. In any case, the corrosion of the ammunition bodies will progress and their contents will increasingly be released into the environment.

Blasting of old ammunition is sometimes unavoidable for safety reasons, e.g. when unexploded ordnance or naval mines from the wars have to be removed for offshore construction work. However, blasting is not an environmentally sound solution for area-wide clearance of dumped munition, as never all the explosives are converted completely and surrounding ammunition bodies are damaged. Blasting would significantly increase the discharge of pollutants into the environment and pose a hazard to marine organisms, such as marine mammals.

Clearance of old ammunition is technically possible, but it becomes increasingly difficult as the ammunition corrodes. In the case of heavily corroded material, the risk increases that outer casings will be damaged during salvage and the contents will be released. Capacities for disposing of old munition on land are already at their limits. Therefore, technical solutions are discussed to incinerate old ammunition at sea on floating platforms.

Effects of TNT and its metabolites on fish

What happens to fish that ingest explosives such as TNT underwater? What effects can be observed? We have investigated this in dumping areas in the Baltic Sea, including the Bay of Kiel. 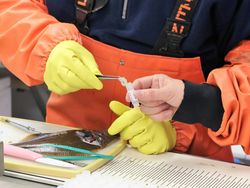 Chemical warfare agents were predominantly dumped in deeper areas of the Baltic Sea because of their hazardousness and brisance. Studies on fish to date do not yet provide a clear picture of their endangerment status. 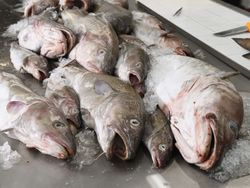 The decision on how to deal with old munitions in the individual dumping areas depends on many factors. Strategies for the clearance of contaminated sites in the North Sea and Baltic Sea are currently being developed. 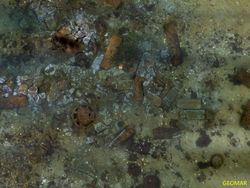