What is the structure of German fisheries? How much fish is imported and exported, which species generate which revenues? And how can brexit change the situation in EU seas? You will find answers in the following dossier.

Not all fishermen are the same. Their economic situation and prospects are as varied as their equipment – from modern ocean-going vessels to traditional cutters with artisanal fishing techniques.

German marine fishermen land fish in the order of 250,000 tons per year at home and abroad. This compares with domestic consumption that is four times as high – around 1.15 million tons; per capita consumption in Germany is around 6 kg of product weight per year, which corresponds to around 14 kg of catch weight. By comparison, the global average is 20 kg catch weight.

The German fishing fleet consists of about 1,300 vessels and is operated by about 850 companies. This seems little given the presence of fishing in the media. Seven ocean-going trawlers owned by international commercial enterprises alone land roughly half of the German catch. The bulk of the German fishing fleet consists of about 1,000 small fixed netters up to 12 metres in length, which operate within sight of the Baltic coast and contribute less than 4% of the German catch. In between, there are about 180 shrimp trawlers, fishing excusively in the North Sea, and nearly 60 vessels of 10 to 40 metres in length that use trawls or passive gear to catch cod, flatfish and saithe, among other species, in the North and Baltic Seas.

The number of dependent employees in marine fisheries throughout Germany is around 1,100, of which about 625 are full-time fishermen. In addition, there are 646 self-employed persons (as of 2020).

We have compiled a brief characteristic of the German fishing fleet below:

High seas fishery can be divided into pelagic (= in the open water zone) and demersal (= close to the sea floor) fishing.

In the pelagic fishery, three large (over 80 m) and two smaller (around 55 m) deep-sea vessels were registered in 2020, fishing mainly for herring, horse mackerel, blue whiting and mackerel in the North Sea and western British waters. Fishing trips to the waters of Mauritania and Western Sahara have also been made in recent years.

Four vessels between 80 and 90 meters in length were assigned to the demersal deep-sea fishery in 2020, operating almost exclusively in the North Atlantic. Main target species are Greenland halibut and redfish in Greenland waters and cod, saithe and haddock in the Northeast Atlantic.

The trawlers compete with other global operators and are equipped with very modern equipment throughout – three of the four demersal vessels are newbuildings. Based on the average of recent years, German deep-sea fishing is currently considered profitable. However, the demersal deep-sea trawlers are heavily dependent on quotas available under third-country agreements with Greenland and Norway, respectively. The pelagic sector is currently strongly affected by the quota reduction in British waters as a result of the Brexit negotiations, which threatens to burden the economic result in the coming years.

Compared to deep-sea fishing, the situation is quite different for the fixed netters. These are small vessels under 12 m in length that operate almost exclusively in the Baltic Sea. Their number has declined sharply over the past decade; in 2020, there were still about 1,040 registered vessels.

A major reason for the decline is that fishing quotas for the important target species of cod and herring have fallen drastically in the Baltic Sea in recent years. Only a small proportion of the cutters are operated on a full-time basis. Often, the fishermen make a significant living from other activities or pursue fishing merely as a hobby. Often, a fisherman owns several vessels, some of which are designed for different purposes.

So far, only on rare occasions is the catch of fixed netters advertised as a regional speciality, with the corresponding opportunities to generate added value. The economic situation has been critical for years and has become a threat to the survival of many of the enterprises still active. The quotas have again been drastically reduced for 2022.

Since the critical situation for the stocks of herring and cod in the Baltic Sea is not expected to improve in the near future, politicians are not only providing bridging aid but also subsidies for the permanent decommissioning of cutters. It is foreseeable that this will also reduce the number of ports in which fixed netters are moored – with negative effects also on other economic sectors such as tourism.

Shrimp trawlers are almost exclusively operated as family enterprises – one vessel per owner. The catch consist almost exclusively of brown shrimp (Crangon crangon), a species without quota limitation which is abundant mainly in the German Bight. However, the marketable quantity is limited. Moreover, the wholesale trade is organised on a quasi-monopolistic basis and the power of fishermen in the market remains limited, despite the trend towards organising themselves into producer groups.

Shrimp fishermen using beam trawlers can only occasionally switch to other species of fish when fishing for shrimps is uneconomic, as most of them do not have quotas for them. The brown shrimp fishery has proven to be profitable over the years, with wide fluctuations. However, the number of enterprises is declining. Vessels are fishing more and more efficiently, while the marketable volume for brown shrimp is stagnant. The average age of a shrimp trawler is now around 40 years. Since 2004, there has been less than one new construction per year on average. Hardly any fisherman dares to invest the sum of over a million Euros required for this, because the prospects are considered too uncertain.

In 2020, 50 trawlers under 40 m in length were registered. In the North Sea they mainly catch saithe, cod, haddock, herring and plaice, in the Baltic Sea mainly herring, cod and sprat. Fishing vessels using passive gear ≥ 12 m accounted for 13 vessels. In western waters they mainly fish anglerfish and deep-sea crab, in the North Sea cod, plaice and sole, in the western Baltic Sea herring and cod. With these species, the fishermen compete both with operations of other nations operating in the same fishing grounds of the North Sea and the Baltic Sea, and with those fish that come from other fishing grounds.

Demersal trawling is concentrated in a few producer groups, in which the fishermen can represent their interests in a bundled way. For example, certain fisheries could be certified by the MSC (Marine Stewardship Council), a label for sustainable seafood which is gaining more and more importance for marketing. Thanks to modern management, the available quotas are efficiently distributed internally and fished out. In addition, some of these organisations process and market their catches themselves, thereby generating additional added value.

Through these measures, bottom trawlers have been able to improve their market position and cost structure. In addition, they have invested in modernisation on a larger scale.

The situation of trawlers in the Baltic Sea has deteriorated dramatically, due to the declining quotas for the main target species, herring and cod. Since it is not foreseeable that the stocks will recover in the short term, closures are foreseeable in the near future.

What are the trends in marine fisheries? Which import and export countries for fish are particularly important for Germany? How high were the landings of individual fish species in terms of quantity and value? And what capacities do German fishing ports have? Answers to these and other questions can be found in the current fact sheet on marine fisheries in Germany (Steckbrief zur Meeresfischerei in Deutschland, PDF, in German, 25 p.).

Brexit as a factor of uncertainty

Brexit has a significant impact on the further development of fisheries in EU seas, as many high-yield fishing grounds are in British waters. The post-Brexit agreement, which was reached at the last minute, also regulates the future fishing modalities of the fishery. Among other things, the agreement provides that European fishermen may continue to fish in the UK's Exclusive Economic Zone, but their share of the fixed total catches will gradually decrease by about 25 % by the end of 2025.

Either way, the slogan "We want our waters back!" would not have meant that UK fishermen would have had free reign to exploit the biological resources in their waters. Under the United Nations Convention on the Law of the Sea, the UK is obliged to enter into joint management agreements with neighbouring states for straddling fish stocks and stocks of highly migratory species.

One sector of the economy affected by Brexit is fishing. The Thünen Institute has investigated the situation and the possible consequences for the fishing industry. 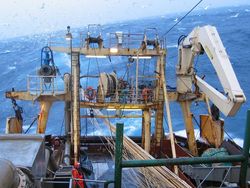 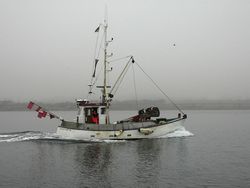 Episode 5: For the museum only?

Climate change, fishing closures, Brexit, red tape, competition for space, an outdated fleet and the image as destroyer of the environment pose an existential challenge to the fishing industry. On the other hand, coastal fishing is positively connotated as a sustainable, artisanal activity. Which path should be taken in order to give coastal fishing a future? 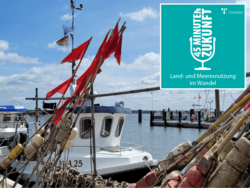