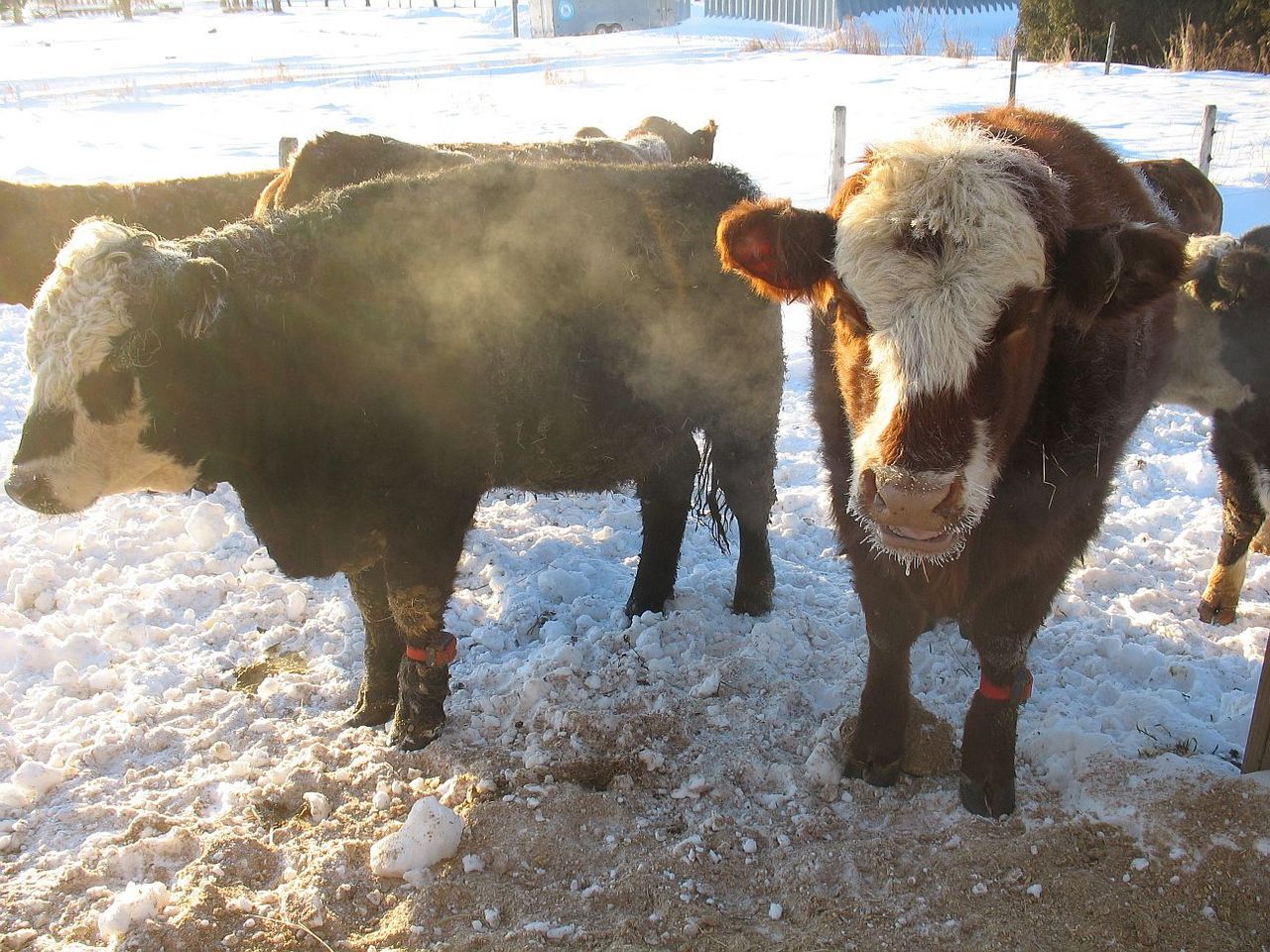 Improving the environmental efficiency of wintering areas: validation of a new concept

Outwintering keeping of suckler cows and beef cattle is a traditional housing system in Canada. Cattle herds are kept on a limited area without roofed shelter but providing wind protection walls. After the wintering period cows return to the summer pasture. In this period, solid manure melts and can be flushed by run-off water to water sheds. Run-off water may be retained by filtering strips and basins. In a new environmental friendly concept of outwintering pens a) environmental impact should be reduced to zero without b) negative consequences for anima welfare.

Main obejctive of the study was the evaluation of a new environmental friendly concept of outwintering pens for suckler cows regarding their ability to resist continental winter climate.

Two groups of ten suckler cows each were kept for two wintering periods between 2012 an 2014 on almost identical wintering areas. Animal based indicators were behaviour like lying, standing and activity, fecal cortisol concentration and water intake. Video analysis was used to measure time of presence.

Heifers and cows of both groups could be observed mainly in functional area 1 (Feeding and water trough section) of the wintering pens. Average time cows were present ranged from 15 to 23 hours per 24 hour day. Second most common area was functional area 3, were wind protecting walls were provided. Mean duration of stay in functional area 2 was below 2 hours. Extreme weather situations like strong precipitation or high east bound wind speed resulted in an increased presence of group 2 in functional area 3. Increased to that, cows of group 1 stayed more often within functional area 1 at the same time. If the area around wind protecting walls was provide with litter, average duration of presence in functional area 3 increased from 3 hours to 13 to 20 hours, whereas group 1 showed the strongest response in behaviour. Suckler cows and heifers decreased lying behaviour due to CCI-impact level 1 (> 0°C) and 2 (0 to -10°C) to level 3 (-10 to -20°C) significantly. At the same time standing and walking as well as quick movement per 24 hour day increased due to CCI-level 2 to 3. Within CCI-level 4 (-20 to -30°C) and 5 (-30 to -40°C) lying time decreased further, whereas standing remained unchanged and locomotion (walking and quick movement) increased. Number of lying bouts decreased with reduced temperature, which can be explained by a decrease of total lying time and consistent duration of a lying period. Almost all behavioural expressions differed significantly between cows and heifers. Lying time of heifers was lower compared to cows for all CCI-levels, whereas activity was higher. From a general point of view, cold climate in terms of CCI-level, had a significant effect on number of lying bouts and all kind of locomotion behaviour.

Fecal cortisol metabolites showed no significant relation with cold climate impact. Results of this physiological indicator can be interpreted in that way, that there was no cold stress in cows. For more detailed interpretation of these results, more complex experiments including different climate impacts (cold to warm) would be necessary. Water intake of cows was on average between 37 and 40 liters per cow and 24 h which was significantly higher than the water intake of heifer. Heifers consumed 23 to 26 liters per animal and 24 h. Water intake was not affected by climate impact.