More time with the mother - better for the calf? 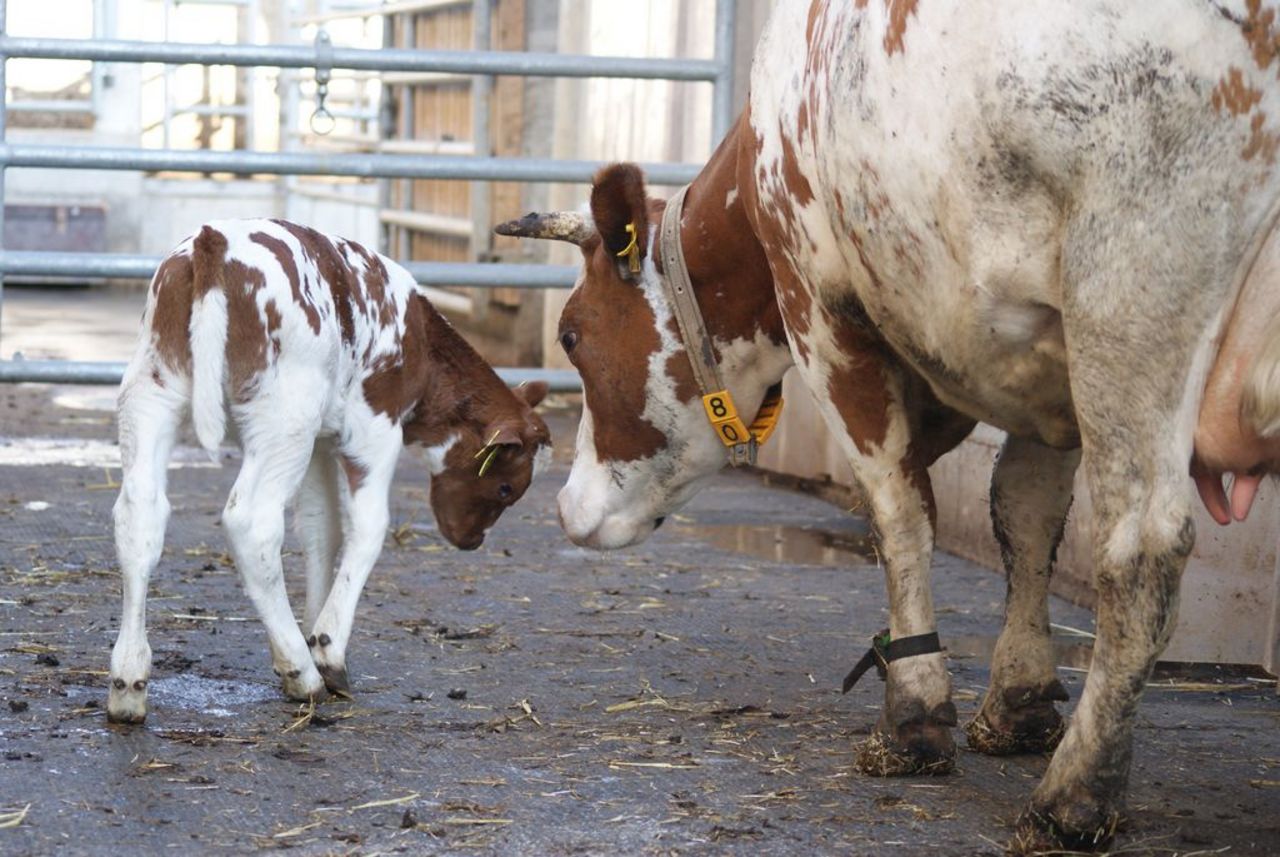 Today, immediate separation of cow and calf after parturition is common in dairy farming. However, an alternative is the dam rearing system: Dam or foster cows suckle the calves and are additionally milked. We are investigating possible long-term effects on dairy heifers reared in that system.

Animal friendly husbandry as well as the limited use of drugs is the main reason of consumers to buy organically produced food. Especially organic dairy farming is deemed to be very natural. However, with increasing knowledge about the real conditions some practices are questioned. One of them is the very common practice to separate cow and calf within 24 hours after birth. Whilst the reduced risk of infections supports this procedure, research has revealed that calves, which are allowed to suck at their dams, show a better physical development and no abnormal behaviour (e. g. cross sucking) compared to artificially reared calves (Roth et al., 2009). Nevertheless, there are shortcomings in dam rearing: Dams react with an inhibition of milk ejection while machine milked and the barn has to be adjusted to the raising system, e.g. providing a separate area for the calf with access to the main barn. Thus, only a few dairy farmers currently practice dam rearing of calves. Most of the studies focused on the suckling period including weaning. Our project aims to reveal possible long-term effects of dam rearing. Based on experiments and analyses of the current knowledge the pros and cons of this rearing system will be evaluated, solutions developed and transferred into farming practice as well as to farm advisors. Thus, the project supports the further development of animal friendly husbandry.

Calves born in 2009/ 2010 and used by Wagner et al. (2010) in their experiments, were raised artificially (feed via automatic milk feeder, up to 16 L per calf and day) or with permanent contact to their dams. After weaning, which took place at the age of three months, calves were raised together. Approximately 3 to 4 weeks prior to the expected calving date the animals were individually introduced into the dairy herd. Animals were observed during this process over 24 hours. In addition, accelerometers were attached to the heifers, and their activity was recorded over a period of 10 days. Over the whole lactation the animals’ behavior was repeatedly observed and data on performance and health were recorded. Furthermore, the animals underwent an isolation test. Based on a literature research the practical implications of dam rearing were analyzed and presented in a review paper (Kälber & Barth, 2014).  At the end of the project, a workshop addressing farmers, consultants as well as scientists will be held to present the current and the knowledge gained by the project and put it up for discussions.

During the introduction into the herd the behavior of the heifers was continually recorded over 12 hours using the Interact 9.0 program (Mangold International GmbH, Arnstorf, Germany). The following 12 hours a 15 minutes scan sampling was carried out. Social interactions were not recorded during this observation period. Activity of the heifers was measured using accelerometers (IceTag3D, Icerobotics Ltd., Edinburgh, UK). In each lactation third, the behavior of the animals was recorded for 2 hours after evening milking. Observation started after all animals were released from the feeding rack. A bedding free calving pen was used for the isolation test, which lasted 15 minutes. The behavior of the animals was videotaped. Vocalization was registered directly. Concentration of cortisol metabolites in feces or saliva was measured as an indicator of stress. Samples were gained during introduction into the herd, post calving and during the isolation test and analysed at the Intitute of Biochemistry (VetmedUni Vienna, Austria). Performance and health data were recorded monthly. Milk recording data were used to evaluate the performance of lactating heifers. Health status was registered directly at the animal (lesions, lameness, electrical conductivity and California Mastitis Test-Score as udder health indicators, Body Condition Score, cleanliness) and using the drug registers.

In contrast to our expectations, dam and artificially reared heifers did not show a different behavior during the introduction into the dairy herd. On the other hand, cows which were reared with contact to their dam reacted much more active during an isolation test. They changed their head position significantly more often and tended to more exploration behavior than the control group (Kälber et al., 2013). Activity pattern of the two groups did not differ but was heavily disturbed for five days following the introduction (Hechmann, 2013). Milk yield and health status during their first lactation also did not vary between the studied groups. Dam reared animals tended to perform better in reproduction (Ufer, 2014). Behavioral observations done during the lactation are still under examination.