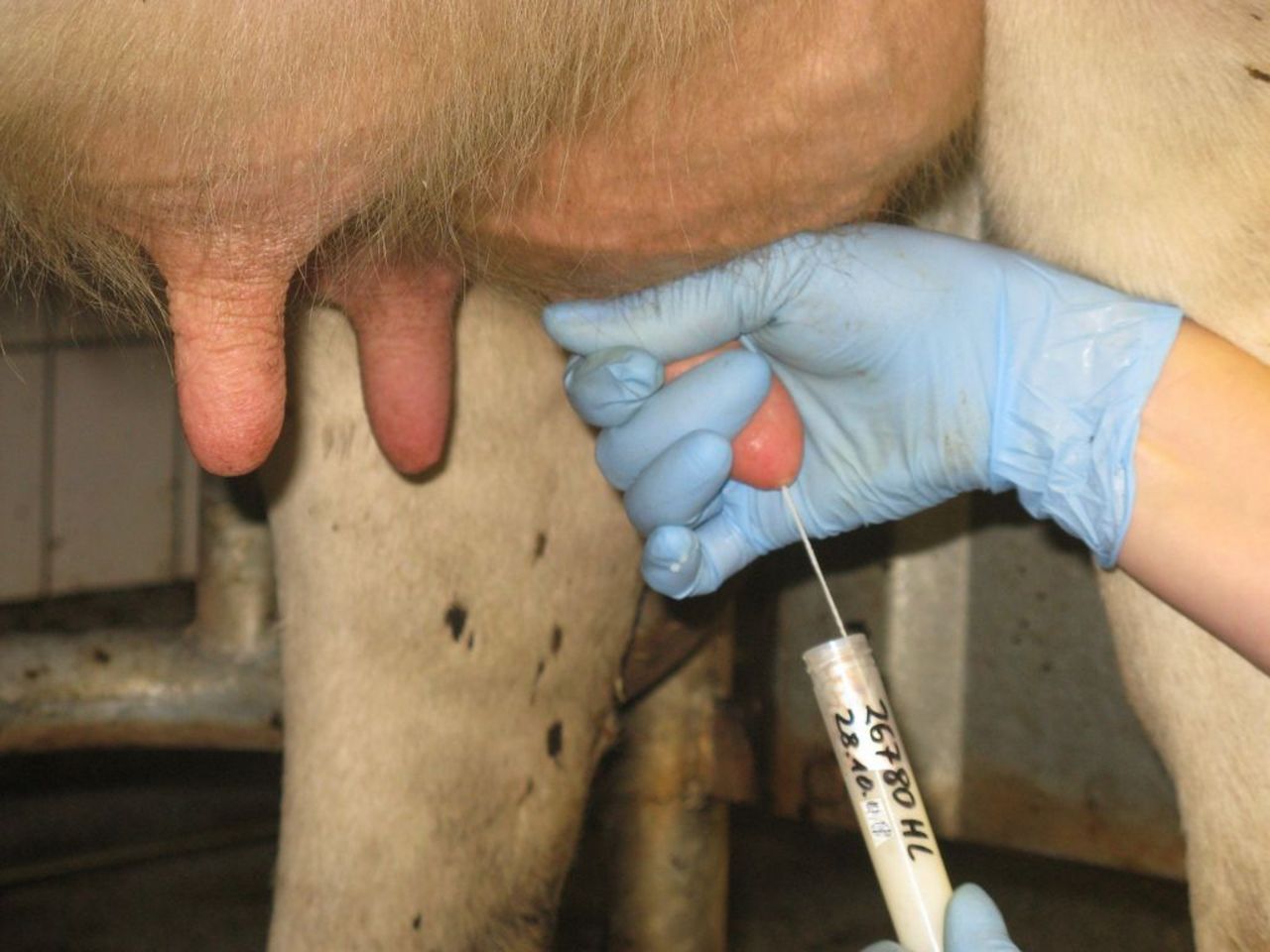 Minimizing the use of antibiotics at drying off

Every use of antibiotics bears the risk for development of antibiotic resistances and to promote resistant bacteria. Thus, the use of such substances has to be questioned. In dairy farming antibiotic dry cow treatment is an important tool to reduce mastitis on herd level. Usually, if an indication exists, all quarters of an udder will be treated with antibiotics disregarding the infection status of the individual quarter.  Therefore the question arises, whether it would be possible to minimize the use of antibiotics by quarterspecific treatment without increasing the infection risk of the untreated quarters of the same cow.

In September 2012, for the first time data on use of antibiotics in Germany’s livestock production were published by the Federal Office of Consumer Protection and Food Safety. Compared to the figures estimated a few years ago , the application of 1734 tonnes in total was alarmingly high. In addition, there is an increasing debate concerning the use of antibiotics in animal husbandry since resistant pathogens which presumably originated from farm animals caused severe infections in humans which were difficult to treat. Antibiotic dry off treatment is a fundamental method to combat mastitis on herd level in dairy farming, and is recommended according to the guidelines of prudent use of antibiotics (BTK, 2010) at a somatic cell count level higher than 200.000 cells per mL.  If an indication is given then usually all quarters of a cow will be treated regardless if the treated quarter is infected or not. This treatment aims to eliminate existing infections and, simultaneously, to protect non-infected quarters (metaphylaxis). The use of antibiotics could be reduced if only infected quarters would be treated. However, there are only a few studies concerning quarterspecific dry off treatment, and the studies’ design is often not comparable. The aim of our study is to investigate whether the amount of antibiotics used at drying off might be reduced without affecting the effectivity or increasing the infection risk during the dry period. Thus, the project also targets at the society’s requirement to minimize the risk for development of antibiotic resistant bacteria by reducing the use of antibiotics in animal husbandry.

The study is carried out in cooperation with the Institute of Safety and Quality of Milk and Fish Products, Max Rubner-Institute (MRI), Kiel. Data are based on the two dairy herds (MRI: Schädtbek, approx. 100 German Holstein cows, conventional farming; TI: Trenthorst, approx. 90 cows in total (German Holstein and German Red Pied), organic farming). All clinically healthy cows are sampled weekly over a period of three weeks prior to drying off. Quarter fore-milk samples are analysed at the MRI on somatic cell count and mastitis pathogens. Animals are then assigned to four experimental groups according to the analyses‘ results and the applied drying off method:

The last group was created due to the fact that the National Organic Program of the United States bans the use of antibiotics in organic farming. Immediately after calving and over the following three weeks the cows are sampled again on a weekly basis to establish the infection status of each quarter. Results gained prior to drying off and in the first weeks of the new lactation will be compared and the effect of drug use investigated.

Besides the results of the cyto-bacteriological analyses of milk samples gained before drying off and after calving, animal specific data, e. g. milk yield and number of lactation will be considered in the statistical analyses.

Results do not exist, yet. At the end of the study, evidence concerning targeted antibiotic dry off therapy and its efficiency is expected.