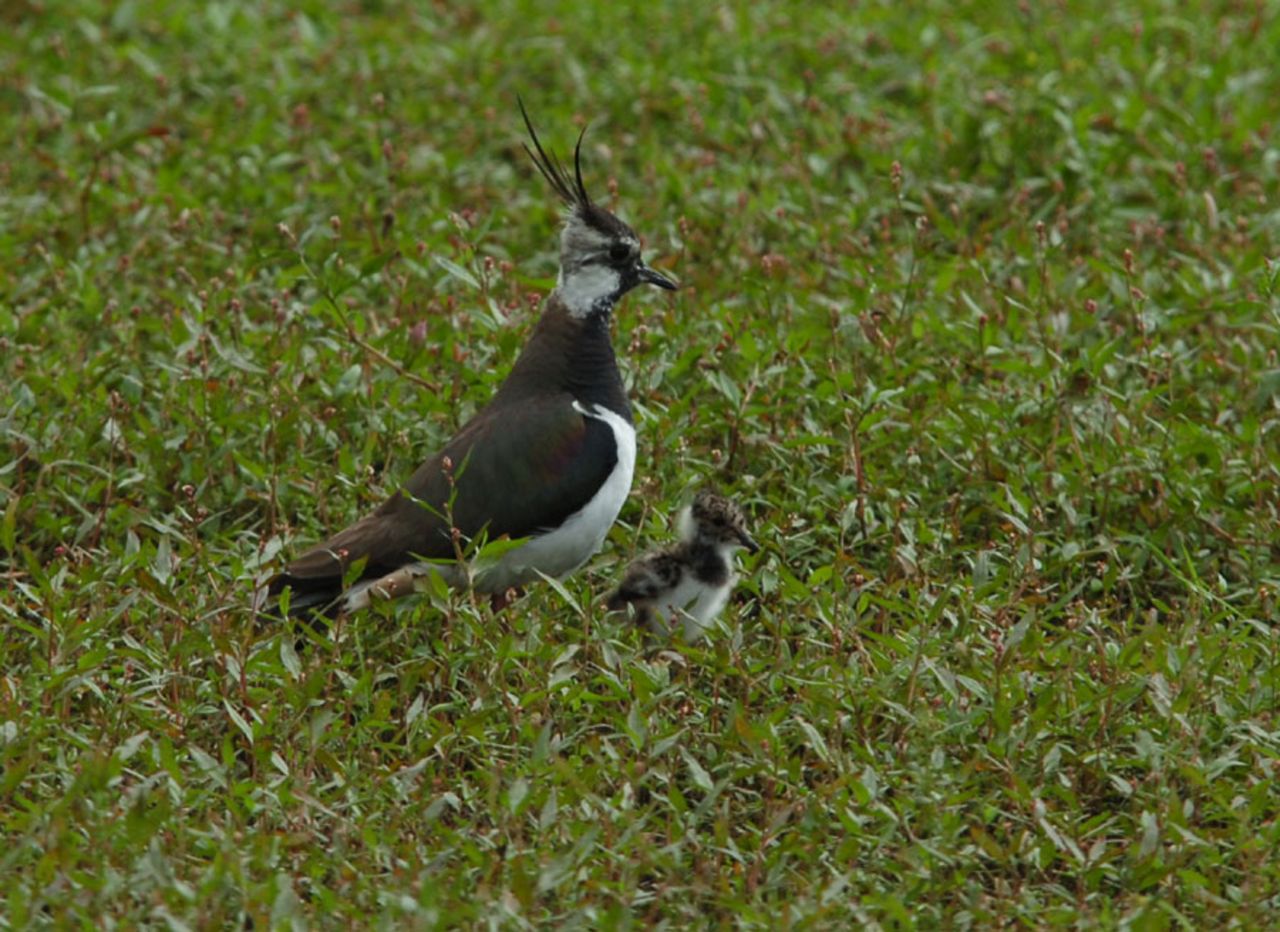 The lapwing as a flagship species: Implementation of a conservation project to foster lapwing populations in agricultural landscapes

In the 1950s, the lapwing was a very common species in German agricultural landscapes. Since then, its population has undergone a steep decline.

Which agri-environmental measures can help the lapwing to breed and successfully reproduce on arable fields?

Within the Federal Program for Biological Diversity (Bundesprogramm biologische Vielfalt) the lapwing is designated as one of the animal species for which conservation in Germany has taken particular responsibility. The lapwing is a typical meadow-breeder and was once common to wet grasslands. In the course of the past decades, the agricultural use of many meadows and pastures has been intensified (shorter mowing intervals, higher stocking rates, denser and more productive swards). This intensification of grassland management reduces the likelihood for nests and chicks to survive. In some regions of Germany, arable fields have become the most important breeding sites of the lapwing. The species is bound to open sites with short vegetation periods. For this reason, the lapwing frequently breeds on fields with spring-sown crops (in particular sugar beet and maize). So far, however, little is known of the determinants of nest site selection and breeding on arable fields.

In eight project regions located in six federal states of Germany we conduct scientific research on the present lapwing populations. In close cooperation with local farmers we test integrated measures of lapwing protection and evaluate their efficiency and practicability.

The Thünen Institute of Rural Studies coordinates the project implementation in the Braunschweig region. We aim to identify the factors that foster the local lapwing populations on arable fields, in particular in sugar beet. For this purpose, we analyse farm-specific data on the cropping system: What are the characteristics of crop production systems on those arable fields where the lapwing breeds? We additionally evaluate the farmers’ approval of measures for lapwing protection. Moreover, we estimate the efficiency and effectivity of the tested measures at the national scale.

The study combines an ornithological survey of the lapwing populations with an analysis of the local farms regarding practices of arable crop production and economics. In addition, we estimate the costs of the implementation of effective measures within the framework of agri-environmental schemes. By means of a population and dispersal model we project the potential population development of the lapwing for several scenarios.

In arable land, as much lapwing pairs as possible should be protected by "lapwing plots" (short-term fallow land within agricultural fields), if necessary flanked by nest markings. Lapwing plots provide breeding and feeding areas for lapwings as well as habitats for other animal and plant species. Overall in arable land, the lapwing plot is the only conservation measure that provides for a breeding success high enough to sustain the population. Lapwing plots should be created specifically on areas where lapwings occur and, if possible, in the vicinity of natural wetlands. Such wetlands should be urgently preserved or even newly created. At least 12,000 hectares of lapwing plots are needed nationwide, for which we calculated costs of 27 to 110 million euros per year. For the financial support of lapwing plots, we recommend different funding instruments depending on the German federal state, because population size and thereby arable land requirement differs by federal state. Eco-Schemes, one funding instrument of the new Common Agricultural Policy from 2023, has an annual flexibility and is thereby of advantage for farmers as well as in the context annually changing breeding sites.

For grassland and protected areas, we recommend to mainly aim for creating a mosaic of wet and dry as well as low- and high-growing areas within an open, wood-free landscape. Furthermore, water management is of central importance in lapwing breeding areas. Effective measures can be implemented through various instruments such as regional projects with farmers, contractual nature conservation, land acquisition or the management of protected areas.

In order to achieve an average breeding success, that is at least high enough to sustain the German lapwing population, the activities described above must be complemented by the creation of "hot spots". This refers to small-scale optimal habitats that meet all the requirements for successful breeding of lapwings (including fences against ground predators such as foxes). Different areas are suitable for implementation such as areas owned by foundations or the public sector, private areas (contract nature conservation, agri-environmental and climate measures) and so-called compensation areas. A sufficient number of such "hot spots" should be established in all lapwing breeding regions in Germany to support and promote local populations.

For an effective and cost-efficient lapwing protection in all habitats, not only lapwing plots should be financially supported. We also urgently recommend the establishment of local environmental managers who are eligible for financial support via EAFRD (EU rural development program). Local managers would be responsible for the planning (including regular mapping of breeding lapwings) and spatial distribution of lapwing plots and for advising and supporting farmers.

Project-Homepage of the NABU (German)