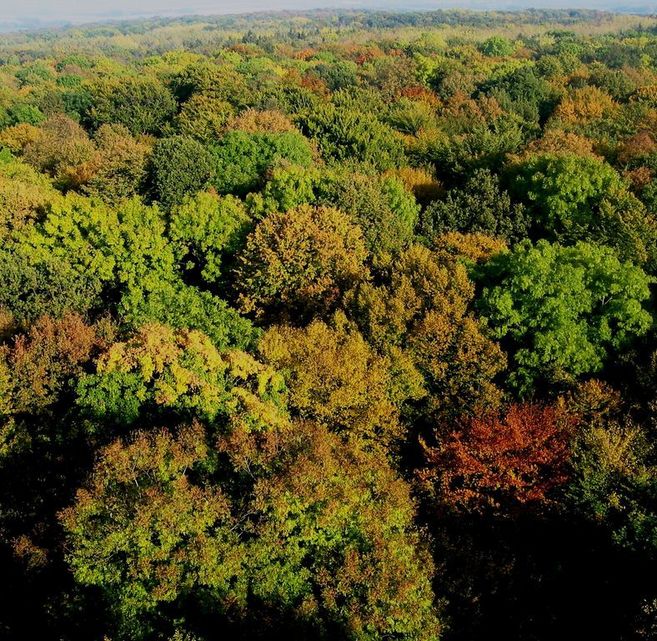 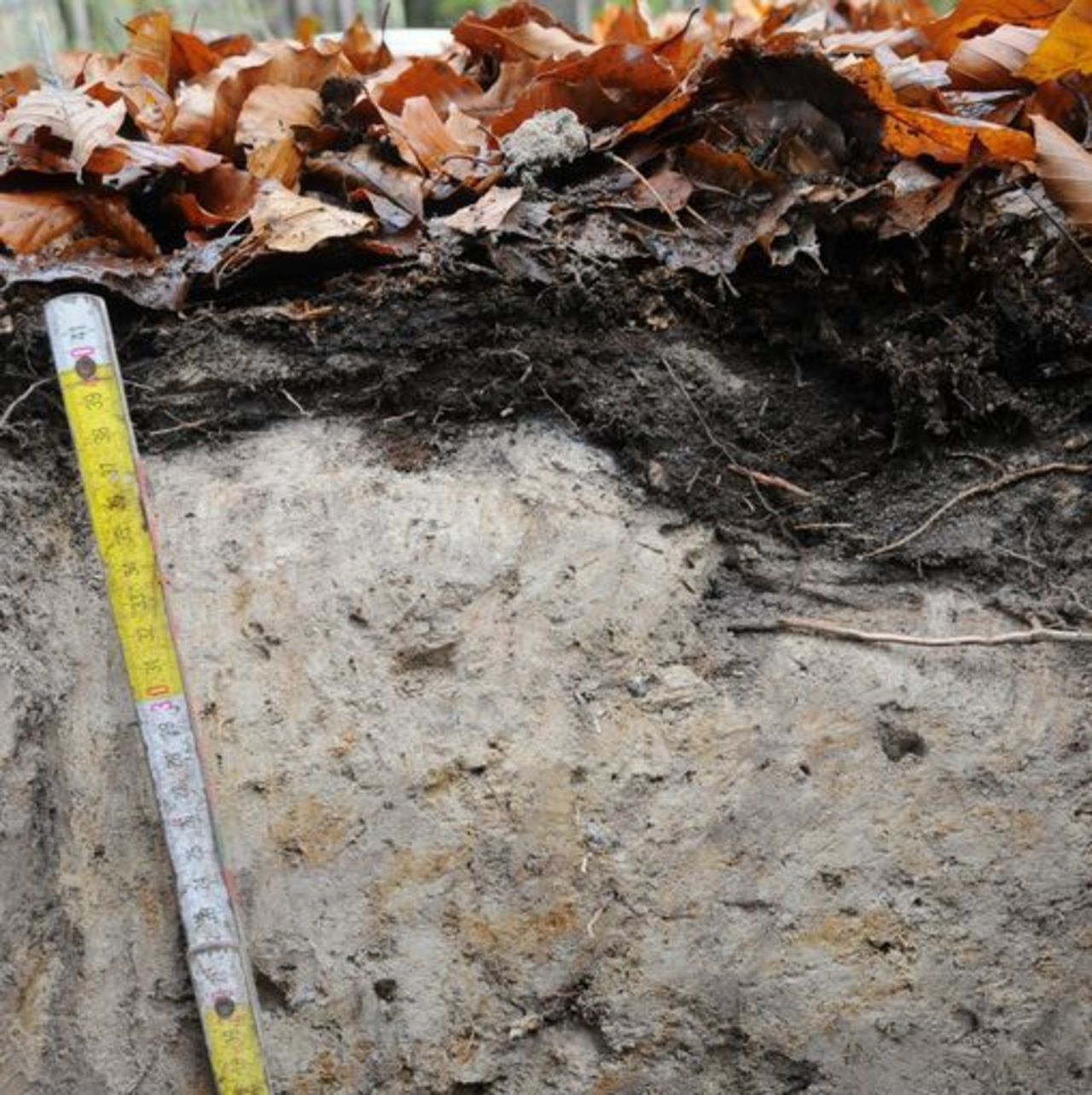 Organic carbon stocks and their changes in forest soils

Approximately 2.5 billion tons of carbon are stored in German forest, more than half of this located in the forest soils. Organic matter from leaf litter and other biomass accumulates in soils. Decomposition of organic matter through chemical and biological processes results in a short- to long-term carbon sequestration of the soil. Different environmental aspects and human activities affect those processes that build a complex interactive system. The national soil inventory (BZE) tries to comprehend the soil carbon cycling and the soil organic carbon sequestration rates of forest ecosystems under recent conditions.

Terrestrial ecosystems, particularly forests, store large amounts of carbon in soils and biomass, hence they are an essential part in the cycle of greenhouse gases like carbon dioxide (CO2) and methane (CH4). One third of the earths` surface is covered by forests, which means that 359 billion tons carbon is stored in the biomass and 787 billion tons carbon is stored in the soil (IPCC, 2001). Approximately 2.5 billion tons of carbon is stored in German forests, with more than half of this located in the forest soils. That amount of carbon corresponds to one 10th amount of the annual German CO2-emissions from fossil fuel combustions. Therefore, soils, as the transition zone between atmosphere, biosphere and lithosphere, represent one of the most important sinks for organic carbon.

In the evaluation of the second national soil inventory (BZE II) we want to describe the contribution of forest ecosystems to the soil carbon sequestration. Furthermore, we focus on how stored carbon responds to changing environmental conditions (e.g., climate change, influence of pollutants, silvicultural management). Human activities have had a lasting effect (for centuries) on the global carbon cycle. The exploitation of forests, deforestation or natural hazards cause a release of formerly sequestered carbon. Also an increase of the mean annual temperature or changes in the water regime leads to an additional release of carbon from soil.

Data about the carbon stored in forest soils are necessary to fulfil the corresponding obligation to report in the context of the United Nations Framework Convention on Climate Change. The monitoring of changes in soil carbon stocks is a topical challenge due to the current requirements to report the carbon balance of forests against the background of the Kyoto Protocol. Thus, our investigations at present consider one of the most important topics in forest soil research. To balance the carbon cycle it is a prerequisite, however, that processes of carbon sequestration and the rate of carbon release are well understood. Only in this way can suitable arrangements be implemented to enhance forest soils as a sink for organic carbon or reduce CO2-emissions from forest soils. Reliable regional predictions of soil organic carbon pools can only be estimated by datasets of national inventories like BZE II.

The carbon stocks and their changes were derived on the basis of inventory data (Grueneberg et al. 2014). Mineral soil was sampled at depths of relevance for the national inventory report; at most BZE points, this involved depth ranges of 0-5 cm, 5-10 cm and 10-30 cm. In a few cases, samples were taken on a horizon basis.

In the BZE I (WOLFF & RIEK 1996) and BZE II (WELLBROCK et al. 2006), forest soils throughout Germany were sampled within an 8 km x 8 km grid. In the sampling procedure, at each grid point, eight satellite samples were taken, within a 10 m radius around a central excavation with an exposed soil profile. For the BZE I, there were 1800 grid points; for the BZE II, there were 2000. The primary reason for the increase in the number of grid sample points, from one inventory to the next, is that for the second it became possible to access areas which had been closed for the first (for which no access permits were available; for example, various former military exercise grounds were opened up).

As part of sampling, the fine-earth bulk density (TRDfb), the coarse-fragment content (GBA) and the organic-carbon concentration (Corg) were determined using comparable methods (König et al. 2005). The fine-earth bulk density was determined via volume-adapted sampling, for different depth ranges; to some extent, estimated values based on soil profiles were used (WOLFF & RIEK 1996, WELLBROCK et al. 2006). Where fine-earth bulk-density data is lacking, existing relevant values from other inventories have been used. That procedure has also been applied to obtain coarse-fragment content values, which are needed for calculation of the TRDfb and fine-earth stocks.

The carbon stocks were calculated from the stocks for the individual depth layers. To that end, it was necessary first to translate horizon-based data into depth-layer sections. This was accomplished, in each case, by calculating the carbon stocks in a given depth layer, with stocks weighted in accordance with the thicknesses of overlapping sections and their carbon stocks.

An area-referenced approach, with strata formation, was used for calculation of carbon stocks and of their changes between the two inventory times. The basis for formation of area-relevant strata consisted of the 72 legend units used in the national soil map “Bodenübersichtskarte der Bundesrepublik Deutschland 1:1.000.000” (BÜK 1000). That source describes the dominant soil types, and parent material for soil formation, pursuant to the German soil system (AG BODEN 1994) and the FAO legend (FAO-UNESCO 1990). Since the classes concerned differed in the number of sample points they contained, the various dominant soil units were aggregated into new dominant soil groups. This increased the basic totality for each class, thereby increasing the pertinent statistical significance. The groups formed were oriented to comparable soil types, to substrate type and parent material and to texture and lime content. All in all, 16 new dominant soil groups, with their pertinent parent material, were then available for area-referenced evaluation. The inventory plots were allocated to the dominant soil groups on the basis of data, collected in the inventories, relative to the parent material and any layering of that material, to soil type, to horizon sequences and to soil texture.